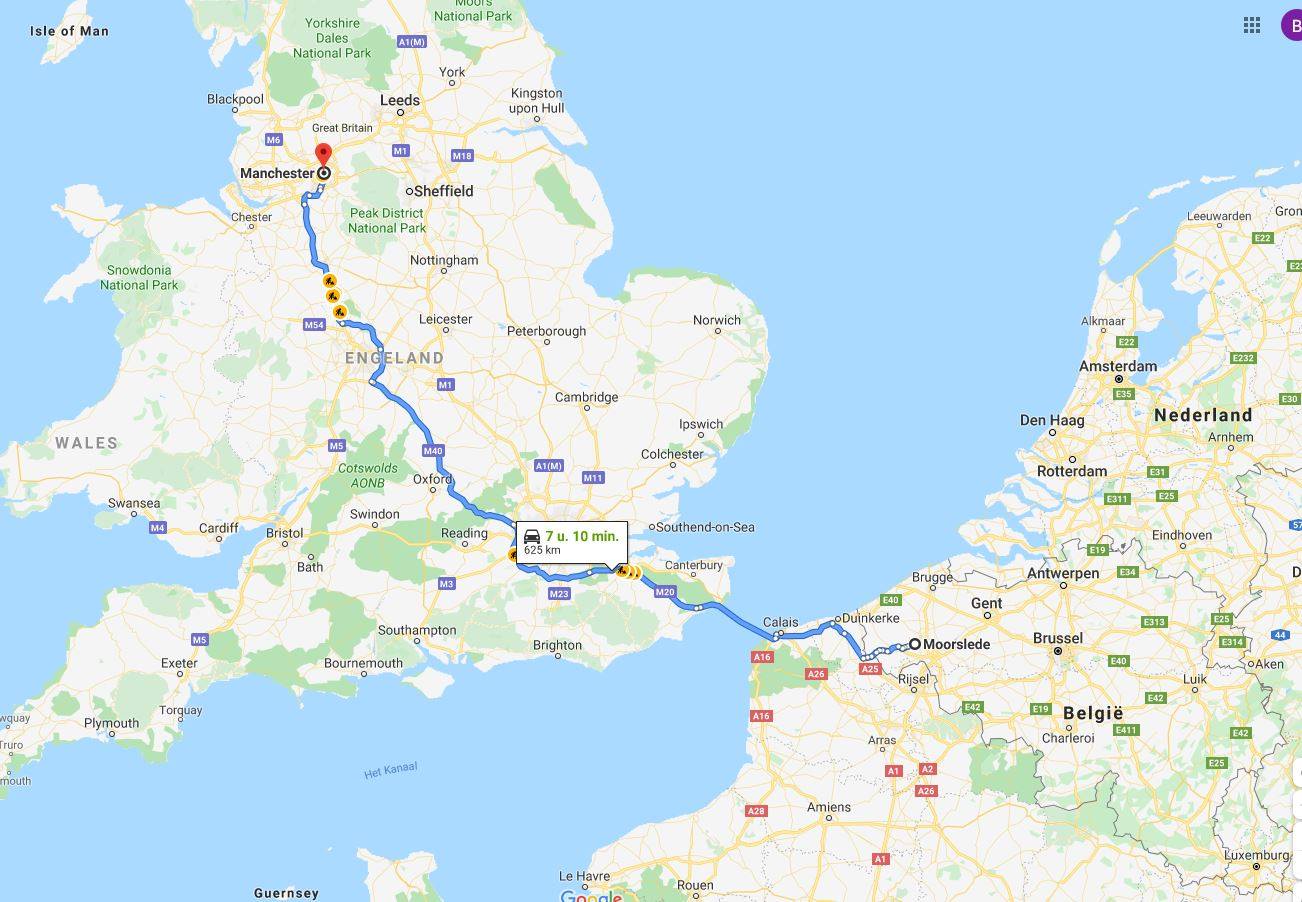 Posted at 18:32h in Design by otkadmin 0 Comments
0 Likes
Share
Next: chapter 13 (I love it when a plan comes together)

While we had been learning Steve’s songs and running down all our “old” songs with Nico; me and Ian and Jon-Paul also had to figure out how we would get the band in Manchester at a preferably low cost scale. Flying to Manchester would be the fastest option from Belgium but there was the little “instruments” problem within that option. After trying to fit the drum-kit in a hand luggage case for four consecutive rehearsals, we had to give up on that idea.

Ok, what’s next ? Ah, the ferry from Zeebrugge to Hull ! Perfect !  If we could take that on the Friday evening, we would only have to drive another two hours on Saturday Morning before entering Manchester. Great!  Until we realized we had to board everyone before 16h45. Everyone had to work till 16h00 and Jan even had to drive from Brussels so there was no way we could ever get there in time. Plus, choosing the night boat  would mean a rather steep budgetary assault for the committee. Conclusion: exit the ferry idea.

There was only one option left. We would have to make this a full-on road trip: Renting a minivan, driving from Belgium through the North of France to Calais, hop on the Chunnel train to take us under the North Sea, and then drive from the Southwest coast through the UK all the way up to Manchester! If we started our trip on Friday evening right after work, we would be in Manchester around noon the next day. Which would give us just about enough time to set everything up and have a quick soundcheck with Steve before performing at the event! This would mean we’d also would have to find a hotel somewhere halfway to try to get some sleep to. Ian and Jon-Paul gave their blessing to this plan and agreed to take all costs of this trip on them. At this point I feel we should give a big thumbs up to the GCFEU committee as they did not only make no problem of accepting these costs but they also helped us finding and booking decent hotels for this trip. Especially Ian helped me out a lot with all practical things considering this trip: hotels, best routes, toll points, … Whenever I had a question, he was there to help me out. So Ian: thanks mate!

And then, early September, finally the weekend of the event was there, we couldn’t wait to hit the road. Steve had already started traveling a few days earlier and kept us posted on the Whatsapp group. The rest of us just had to take care of a little detail first: WORKING ALL DAY  =( .

As most of us are teachers, asking our Big Chief for a day off on Friday was not really feasible. So it turned out to be, as expected, one very LONG and hectic day. Right after closing my classroom and wishing my pupils a good weekend I drove to the garage to pick up the rented minivan. By the time I arrived home with it, the rest of the band had already arrived and was waiting to start loading the trunk, which was just big enough to fit all our equipment in it (phew!). As we were on a tight time schedule, we drove off asap to France to get to Calais.

After a short customs check of our van during which they (thank God) did not attempt to investigate our carefully constructed trunk puzzle, we could drive the van in the Chunnel train and head off to Folkestone. Once arrived in the UK we put our clocks one hour back, reminded ourselves to drive at the left side of the road from now on and headed off to London. The aim was to drive past London that evening so we would no longer have to drive the very busy M25 on Saturday morning.

The M25 lived up to its reputation so even with only 140 miles to drive from Folkestone to Bicester and winning an hour by entering the UK time zone, it was still past midnight by the time we finally arrived at our hotel. And the bar was closed ! Rock ‘n roll, dear readers!!!

After a short night where some of us actually managed to sleep a bit, we quickly checked the van on the hotel parking. Luckily all equipment was still in it, this was one of the things we had been worrying about from the beginning. We often hear horror stories of stolen instruments so this was a bit of a stressy itch in the back of everyone’s head all weekend. After having a typical UK breakfast together, we hit the road again heading North. Steve was sending us pictures of the stage, mixing board and the venue. Things looked really professional! Excitement grew, together with our fatigue but this was totally worth it.

Around noon, we finally entered Manchester and after a bit of looking for the right entrance, we parked the van at the back of the venue. We had made it in time !  No time to eat or rest, time to unload all our stuff and try to find Jon-Paul, the two Ians and off course Steve … we had a show to play !

previous: chapter 11 (Your mission should you choose to accept it)
NEXT: chapter 13 (I love it when a plan comes together)

NEXT: Chapter 13: I LOVE IT WHEN A PLAN COMES TOGETHER

PREVIOUS: Chapter 11: Your Mission, Should You Choose to Accept it..