Steve Weeks Music Web Site Redesign – What Was I Thinking? 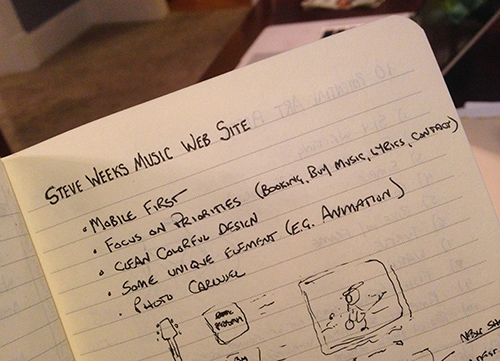 Now that I had decided to embark on an overhaul of my web site, I had to ask myself, “Why in the world am I doing this?”

It may sound like an obvious question to ask, but before I started slinging code, I wanted to really take stock of what I hoped to accomplish by re-designing the site and approach it in a more measured process.  So I brainstormed a bit about the purpose of launching a new site, and a few things became clear immediately.  The problem with my current web site at the time, was that it just didn’t work well.  It didn’t function well on mobile devices.  It didn’t serve me well as a promotional tool.  It didn’t guide visitors to the information they were looking for or to information I wanted them to have.

Having said that, there were a few things that it did do well.  I had received quite a bit of positive feedback about the animated movie at the beginning and the interactive monkey that would drop into the screen occasionally.  People especially liked the “Don’t Press” button which caused a dozen monkeys to appear suddenly.  Basically, they liked the fun and unusual stuff.

So in a nutshell, I decided the site should function better while continuing to have some color and uniqueness.  Based on this, I came up with the following requirements:

Now that I had my requirements, I was ready to start coding right?  Nope.  Next, I decided to inventory the new site which will be the subject of my next bog entry, so if you’re following along, check back in.