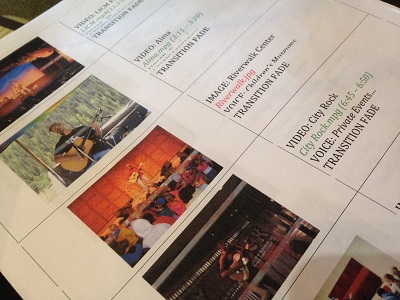 This is the story of the next great American film…

Ok, not really, but it is the story about a video project that I’ve decided to take on.  It begins with some unassuming characters, two little blurbs of text.  The first we’ll call Value Statement.  He’s a small paragraph  of verbiage that I use quite a bit when trying to book music performances, and is intended to communicate what I have to offer as a family music performer to any potential venues.

I’ve gradually crafted this statement over the years, and I customize it to match the venue and situation, but basically it goes something like this:

I provide a 45 minute to 1 hour interactive show filled with music, humor and games for young kids and their families.  I’ve performed all across the US and Canada, and my music is in frequent rotation on Sirius XM satellite radio (Kids Place Live) where I’ve had multiple #1 hits.  I’ve won the children’s music category of the US Songwriting Competition as well as various other parenting and music awards.

The second character in this story is Promotion Blurb, a small piece of verbiage that I use on my performance listings and that venues use to promote shows.  Her job is to get butts in seats.  Again, I customize the verbiage for different performances, but it usually looks like:

I use both of these extensively and truthfully feel like they work pretty well for me.

Enter Performance Video, stage left.  He is actually the ghost of a character  because a good performance video is something that I’m lacking at this point.  He’s been missing from this play up to this point, but that’s about to change.

Sometimes when I’m attempting to book gigs, particularly ones at larger or more prestigious venues, I’m asked to provide, among other things, a video of my performance.  Over the years I’ve created and accumulated just about all of the artifacts and documentation that a musician might need; head shots, references, tech riders, credentials, stage plots etc.  However, I don’t have a good performance video.

Don’t get me wrong, there are lots of videos out there of me performing.  Fans have taken countless videos on their phones and venues have occasionally filmed entire performances.  But none of them are the perfect combination of an impressive venue, high quality sound, a full house and a good performance from me.  It seems that there’s always at least one element missing.  The show will have light turnout so when the camera pans to the audience, it’s disappointing, or the sound will be really bad, or I’ll just flub up during a song.

The bottom line is that when I’m asked for a video of my performance, I struggle with what to send.

I thought about asking a videographer to come along with me on one of my tours, but there’s so much out of my control on these trips, and who in their right mind would want to come on tour with me.  At one point I contemplated hosting a free concert solely for the sake of getting a good video, but the effort and cost involved in this is just too big.  I even asked my daughter to film me at a nice theater once, and got back a bunch of footage of her making faces into the camera.  Well, she was 9.

In the end, I’ve just continued without a good performance video thinking that someday one would just happen magically.

Then one day I had an idea… a crazy idea.  Maybe I had been thinking about this all wrong.  When a venue asks for a performance video, instead of looking at the request as an obligatory check mark in the booking process, I should be looking at is as an opportunity to market myself.  I mean, how often does someone solicit you to send them material about yourself?  This video could be my foot in the door for any venue, the keystone of my booking process.

As soon as this epiphany came to me, ideas started flooding in.  I could really pick and choose the best snippets from all the footage I already had.  I could showcase venues of all different sizes and shapes, and since this would be a montage, live sound quality wouldn’t be an issue.  I would just use the studio version of one of my songs as background music.

Then it hit me!  This would be a video representation of my value statement, an I would use it for all bookings, not just when a video is requested.

Super excited about this new project, I sat sown and started inventorying the footage I had.  It’s amazing how, when you’re only looking for 5 second clips, even the videos that didn’t seem very useful had some value.  Almost every video had some moment that worked. 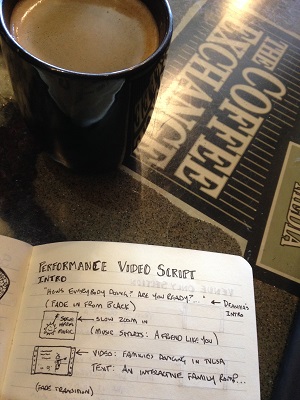 Watching all this old footage  was a bit painful for someone who doesn’t particularly like to see himself on film, but I ended up with a good list of possible clips along with start and end times.

I created a rough hand-drawn script of the video incorporating the clips I had chosen and my value statement.

It was at this point that I made the very wise choice of asking advice from a close friend who frequently helps me on creative projects, someone whose opinion I value very much and who looks at ideas from a different angle than I tend to.

He came up with a fantastic idea.  I should have 2 versions of of the video; one for booking shows (value statement) and one for promoting (performance blurb), and maybe the promotion version could be modified for a given a show or tour to include specific details.  This could be a nice thing for me to offer a venue that books me, and a good way to attract an audience.

So I created a slightly more formal script which mocked up some of the scenes, and then contacted my friend and local director/videographer Dave.  The plan was to have him get me started and then hand the project off to me for completion and fine-tuning.  I’ve done a little video production and have always want to learn Adobe Premier.

Having worked with Dave on my music videos, I knew he had skills, but actually sitting down and watching him work wonders in Premier was amazing.  I don’t know why he isn’t working in Hollywood.  It was remarkable to witness, and in a couple of hours I had a working raw version of about 1/2 the video.

Now the plan is for me to buy a better laptop, upgrade my Adobe subscription, and run with the ball, under Dave’s tutelage of course.  I’ll post the video once it’s done, so check back in if you’re interested.