Steal This Song – The Lyrics 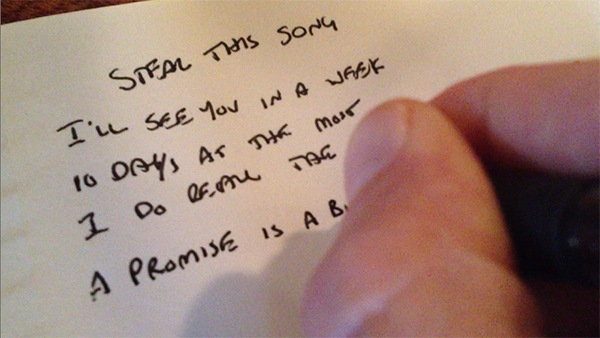 01 Feb Steal This Song – The Lyrics

Posted at 08:14h in Songwriting by otkadmin 0 Comments
0 Likes
Share

In the summer of 2013, I took on the challenge of writing a road song.  During a tour out to Michigan, I gathered inspiration from things I overheard and saw (Check out my previous post Steal This Song – Redux to see a list of those inspirations).  Now I just had to turn these seemingly unrelated items into a set of lyrics.

I had to get back from Traverse City, MI to Colorado in 2 days in order to catch a flight to San Diego, CA where my family would be waiting for me.  The first day I got up at the crack of dawn and drove through to Des Moines, IA.  During the ride, I pieced together the thoughts I had jotted down into semi-coherent lyrics.  They changed a little bit afterwards, but not much.  I didn’t have any music, but the lyrics at least were done.  The problem was I had nothing to work on for the next day, so the drive from Des Moines to Denver was really long.  I should’ve paced myself.

Oh well, at any rate the lyrics are…

I’ll see you in a week, 10 days at the most
I do recall the promise that I made
But a promise is a bird that can’t be kept for long
And how long ago that was I cannot say

I’m headed into the mouth of another storm
Even so, it’s always just the same
The mile ahead exactly like the one I left behind
I’m not expecting too much of a change

Seems I’m always leaving just when things get good
I’ll never know how anything turns out
So while you’re back there dancing in the square, I’ll be here
Miles away, watching rain come down