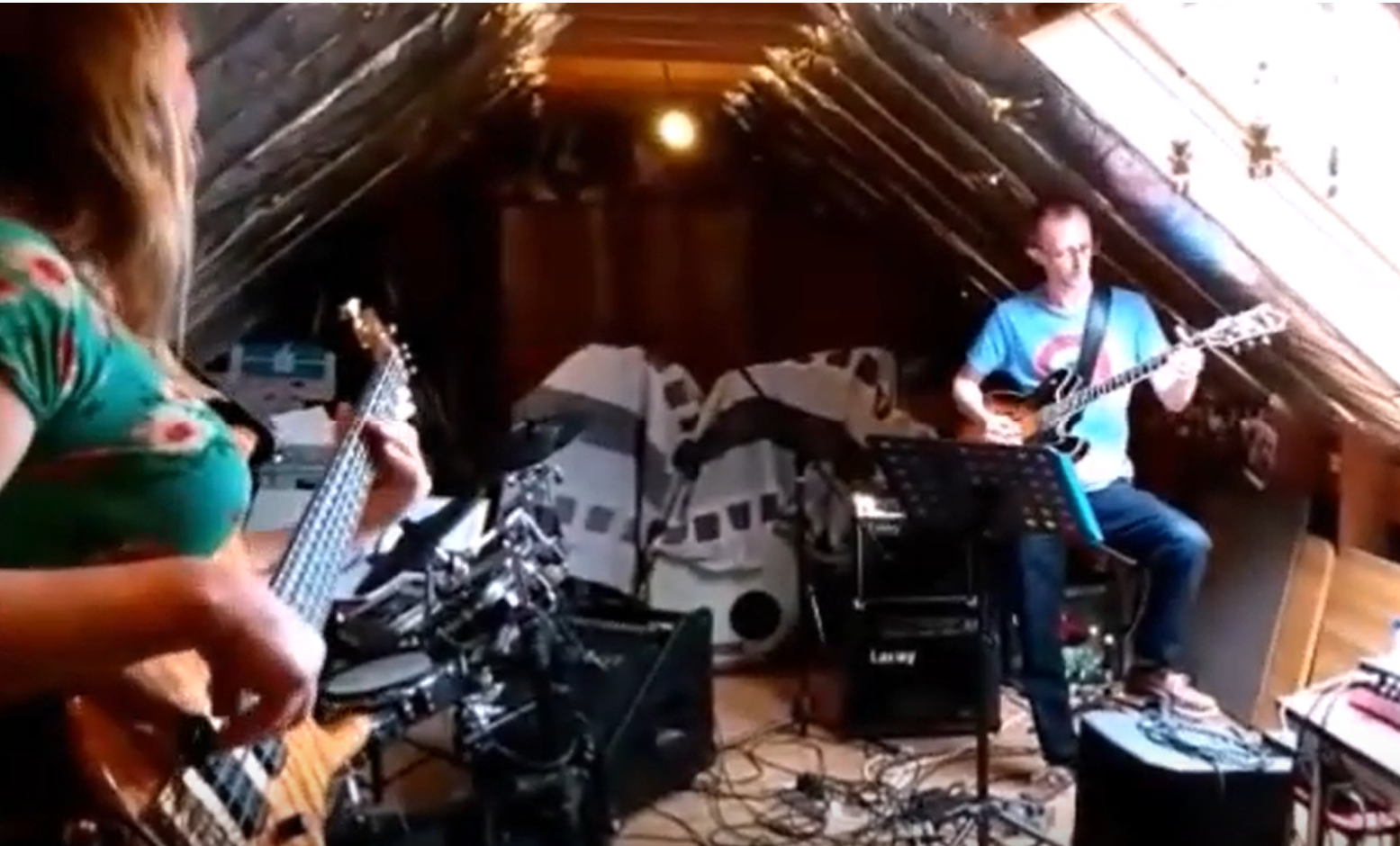 Posted at 11:17h in Design by otkadmin 0 Comments
0 Likes
Share
NEXT: chapter 5 (Which Ian are you talking about?)

So, where were we?  Oh yeah, the first ever Travel Bugs concert at the GeoCoinfest Europe event in Manchester UK looked like it might actually be a reality due to the tenacity of Jon-Paul and the willingness of a band of musicians from Belgium.

But make no mistake, there were still tons of obstacles to overcome in order to make this thing happen, not the least of which was the logistics of how to prepare for a show with musicians on another continent.  In an effort to keep my costs down, this would have to be a quick fly-in-fly-out trip for me, which left no time for an in-person practice.  We would literally have to perform together for the first time at the actual event.  Seemed a little intimidating.

I had a live video chat with Hans and Jan to discuss our plan.  As we are all consummate professionals, I assure you we only discussed business during the chat.  There was no socializing, jokes, discussion about our favorite music or general tomfoolery. OK, maybe just a little. 😊  I was really encouraged by their excitement for the project and by their good-natured personalities and willingness to collaborate with me.  Maybe this was going to work out after all!

We had to solve the problems of learning the songs and of practicing, and we had to do this virtually online somehow.  We put together a game plan to tackle one song at a time, and it went something like this:

Now, you’d think that I was singularly qualified to play my own songs, but it turns out that if you don’t perform your music for almost a decade, it might as well be someone else’s work.   I really had no idea how to play these songs anymore.  For the most part, I had recorded them and never played them again except for once in Wisconsin.  So, I would listen to the song and try to work it out on my acoustic guitar until I had it down solidly.

Once I had the song memorized, I would attempt to make crude tablature of chords and lyrics.  I’m not musically educated.  I play by ear, and don’t even know the names of many of the chords I play.  I had to research some things online in order to communicate the music in a way that was at least usable.  I couldn’t produce proper tabs., but I could at least create documents with lyrics and basic chords.

Since my “tabs” weren’t very detailed or robust, I would also create a video where I demonstrated how I played the song and explained any unusual aspects about it.  These were very informal short videos I recorded in my home studio.

I would then record a demo of me playing the song on my acoustic guitar since this is the instrument I’d be taking to the UK.  The idea was that the band could practice along with my demo as if I was there.  I would’ve just flown to Belgium, but the Travel Bugs’ private jet was in the shop.

One unexpected positive consequence of this step is that I now have tabs, lyrics, demos and instructional videos for the songs.  Since I don’t play these on a regular basis, I suspect, I’ll be using them myself to come up to speed quickly should I get an opportunity to perform them again in the future.

The Band Practices and Creates a Demo

I can’t tell you the full story of how Hans, Jan, Nico and Yasmine prepared for the song.  Hopefully they’ll add some comments below with more detail on that.  What I do know is that they don’t all even live in the same city, so I suspect they probably practiced individually a bit.  But eventually they would schedule time to get together and rehearse, and it was during these practices that they would also work on my songs.

One of the really cool things is that they actually added more color to the songs.  They didn’t just learn them as-is, but changed the orchestration.  For example, they decided that they wanted to change the choruses of the title track “Found It!” (a straight-forward pop-rock tune) to be reggae.  The music was evolving as they contributed their ideas and talents.

Once they felt that they had the song down, they would then produce a demo of them playing the song without my parts and send that to me.  This way, I had a version that I could use to practice “with the band”.

So, I spent quite a bit of time standing in my living room playing along with the virtual “Bugsy Travels and the Ammo Boxes”.  It’s a really amazing thing to hear someone else perform your music, a bit of a thrill really.

Although we didn’t need to go beyond this, I would always record one last demo of the song with both the band and me together.  This wasn’t necessary for practicing, but we all thought it might be a nice thing to provide to the geocaching community and generate some excitement about the event.

Here’s a full band demo of “TNLNSL” on Soundcloud

We had several other video meetings, and there was certainly other logistics that we had to iron out, like schedules, sound requirements and instruments, but the above process was our basic strategy for getting songs ready to perform.  We managed to get 8 of the nine songs on the CD worked out (“Travel Bug” just wasn’t feasible) as well as the single I had written “The Worst Cacher”.    It was an unusual approach but really interesting, unique and fun.  Keep in mind that this was in addition to the band preparing their own songs as they would be performing as Bugsy Travels and the Ammo Boxes at the event also.

And then there was the question of the venue and sound system.  We couldn’t arrange all of that ourselves.  This is where another couple of heroes come into the story.

PREVIOUS: Chapter 3 (Meet the belgians)
NEXT: Chapter 5 (which ian are you talking about)