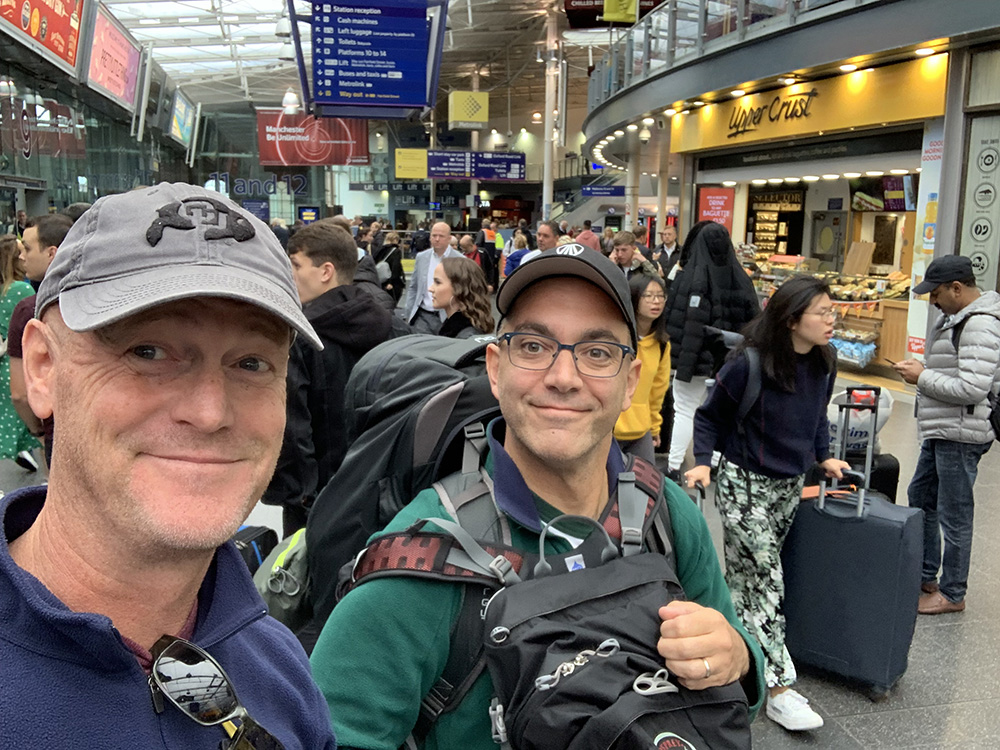 Posted at 10:36h in Design by otkadmin 0 Comments
0 Likes
Share
NEXT: chapter 10 (meanwhile in belgium)

How do you get to Manchester, England for your first ever European gig?  Well, you take a car to a shuttle to an underground rail to an airplane to another airplane to an express train to a subway to a train to a taxi, that’s how.

It was now time to embark on my trip to perform at the GeoCoinfest event in the UK.  All the pieces were in place.  I had worked with the band in Belgium to practice online and felt like I knew the material well enough to at least get through it.  Airfare was booked from Denver through Reykjavík, Iceland to London, as well as the shuttle to Denver airport, express train from Heathrow Airport to Paddington station where I’d meet my college roommate Bill, and the train from Euston in London up to Manchester Piccadilly station.  Time to sit back and enjoy the ride.

My day started when my long-time friend Andy, who was also Bill’s roommate in college, picked me up at my house.  We went to a little pub for lunch and pint.  He asked me where I was going this time.  I travel quite a bit for music, and he just figured this was one of my usual trips to the East or West Coast to perform.  When I told him England and Iceland he said, “Holy crap, this is THAT trip?”.  Yup, it’s that trip, the one I had worked on for so long and had been a dream of mine for years.

Andy dropped me off at pick-up spot for the shuttle to Denver International Airport.  Even being officially on the road, I still couldn’t believe this was happening.  Bill and I were keeping in touch as he was also flying on IcelandAir to London from Newark, NJ, but was arriving a few hours before me.  The plan was for him to check in to the hotel and hang out for a while then meet me at Paddington Station.  We skyped while I was having dinner at DIA and made plans to get back in contact once I was on the Heathrow Express train from the airport.

One of the things that is very stressful about air travel as a musician is my guitar.  Not only is it fairly expensive, but it’s also easily damaged and if lost, the entire trip becomes problematic.  I have had a guitar crushed by the airlines before, and whenever I do have to check it, I can be assured that it will be opened and maybe even played in route.  Many musicians have stories about slacking the strings on their guitar when they fly to minimize the chance of damage, only to find that the guitar has been tuned when they get it back!  I like to keep it with me if possible, and if I do have to gate-check it, I like to know that it’s not going to go through the baggage handling system to change planes.  And I know from experience that most airport baggage claims can not tell you for certain where your guitar will come out… sometimes on the carousel, sometimes with oversized luggage, sometimes on the ski/golf carousel, and sometimes in an office somewhere.

When I fly domestic, I can usually get it in the compartment above (it’s a small guitar), and I go way out of my way to always book direct flights.  But there was no way around the connection in Iceland (that was one of the points of this trip), and I didn’t know IcelandAir’s policy about guitars.  Their web site implied that it would have to be checked.  Still I took my guitar to the gate and when I saw the airline attendants lining up to get on the plane, I approached them, cap in hand, and tried my very best to ask them if I could take the guitar onboard in Icelandic.  I was very nervous as I had never actually spoken Icelandic to anyone before at this point.  As luck would have it, Icelanders are some of the nicest people I have ever met (more on that later), and these ladies were no exception.  They explained to me that they couldn’t guarantee it, but they would try.  One particularly kind attendant Þórgunna, told me to come find her once I got on and she would help me out.  When I got on I saw her and she immediately grabbed my guitar and put it in their closet.  The exact same thing happened on the flight from Iceland to London.  IcelandAir attendants rock as far as I’m concerned.

The flights were long an uneventful except for an amazing sunrise over Greenland, several Icelandic language films and a short stop at the Reykjavík airport where I bought what I thought was a classic Icelandic book, but after seeing the questioning look of the salesperson, realized it was a cheap romance novel.  I did attempt to speak Icelandic as much as possible and the Icelanders I spoke with were extremely patient and helpful.  I do think it is a beautiful language, and when the airline attendant made the announcement that the plane was landing, it sounded so wonderful, I didn’t want to leave the plane.

Once at Heathrow, I got through customs which was no small feat.  Carrying a guitar case makes you a person of interest entering the UK for sure.  After a 4000 mile walk I got on the Heathrow Express and to Paddington Station where I met Bill.  After a short walk to the hotel we went out for dinner and a pint.

As I can’t sleep on planes at all, I was on fumes at this point, but I was so happy I could hardly contain myself.  Was it really possible that in 2 days I’d be performing in England?  We got a good night’s sleep, a nice breakfast and walked to Euston station where we caught the train to Manchester.  I saw Wembley stadium on the ride… maybe someday.

We arrived at the Manchester Piccadilly and grabbed a taxi to our hotel there.  We were in Manchester!  And we knew this because all of the floors on the hotel were named after Manchester rock bands.  We were on the Joy Division floor if I recall correctly.

During all of this time, Hans, Jan, Nico and Yasmine were making their way from Belgium.  I think they originally planned on taking a boat but ended up driving.  How do you drive from Belgium to the UK?  Well that’s a story I’ll leave for them to add.  They wouldn’t be arriving until after my first set tomorrow and right before we played together for the first time ever.  Crazy.   But it looked like all of our planning and practice was going to come to fruition very soon.

NEXT: Chapter 10 Meanwhile, in Belgium