Steal This Song – The Video 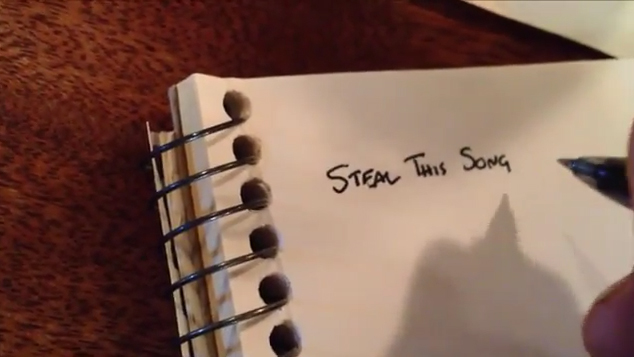 05 Feb Steal This Song – The Video

This is the last post in my series about a songwriting challenge I gave myself back in the summer of 2013.  Check out the previous posts about the inspiration, the lyrics, and the music for the full story.

Now that I had music and lyrics for my new tune “Steal This Song”, I decided that I would try and make an amateur music video for it.  I was in Durango, CO for a couple of performances, so I took a pen, paper and my iPhone to dinner that evening.  I went to a nice Irish pub in downtown Durango, and took random video snippets of the bar.  I also took video of me writing out the lyrics at the bar.  I wasn’t sure how this would make a video, but it was the only idea I had a t the time.

When I went back to my motel, I decided not to take the free trolley and walk instead.  All along the route, I took more random video of Durango at night which was fairly deserted at that hour.  During the walk, the battery on my iPhone was threatening to run out, so I was frantically trying to get as much footage as I could.  There wasn’t much to see, just streetlights, signs and roads, but it was what I had to work with.  At the very end of my stroll, I decided to leave the lyrics on a bench in the spirit of the song.

When I got back home, I pieced the video clips together.  Here’s the final product…

So there it is.  My little songwriting journey from inspiration to completed tune and video.  I can now say that I have a “road song” even if it is a bit experimental.  But wait …there’s more!

In the spirit of “Steal This Song”, I’m offering it up to be stolen.

Wanna make a better video for it.  Awesome!  Here’s a link to the music…

Think you can sing it better.  Well, I was never happy with my vocals anyway, so here’s a link to the music without words…

Steal This Song (no vocals)

Brave enough to try and work “Master Retarder” into the lyrics.  I’m cool with that.  This was a wonderful little project for me, and you’re welcome to join in the fun.  You can leave it on the bench or pick it up if you feel so inclined.  Enjoy!